I-SITE MUSE assessment: the international jury validates the continuation of the project

I-SITE MUSE assessment: the international jury validates the continuation of the project

On November 28, the I-SITE Montpellier Université d’Excellence (MUSE) reported on its first two years of existence and succeeded to prove its worth and convince the international jury of the IDEX-ISITE program.
Hence, the Université de Montpellier and its partners were comforted in their collective dynamics, and now aim for the certification’s final perennation in 2021, along with the construction of a university that will be internationally acknowledged for its ability to address tomorrow’s major challenges. 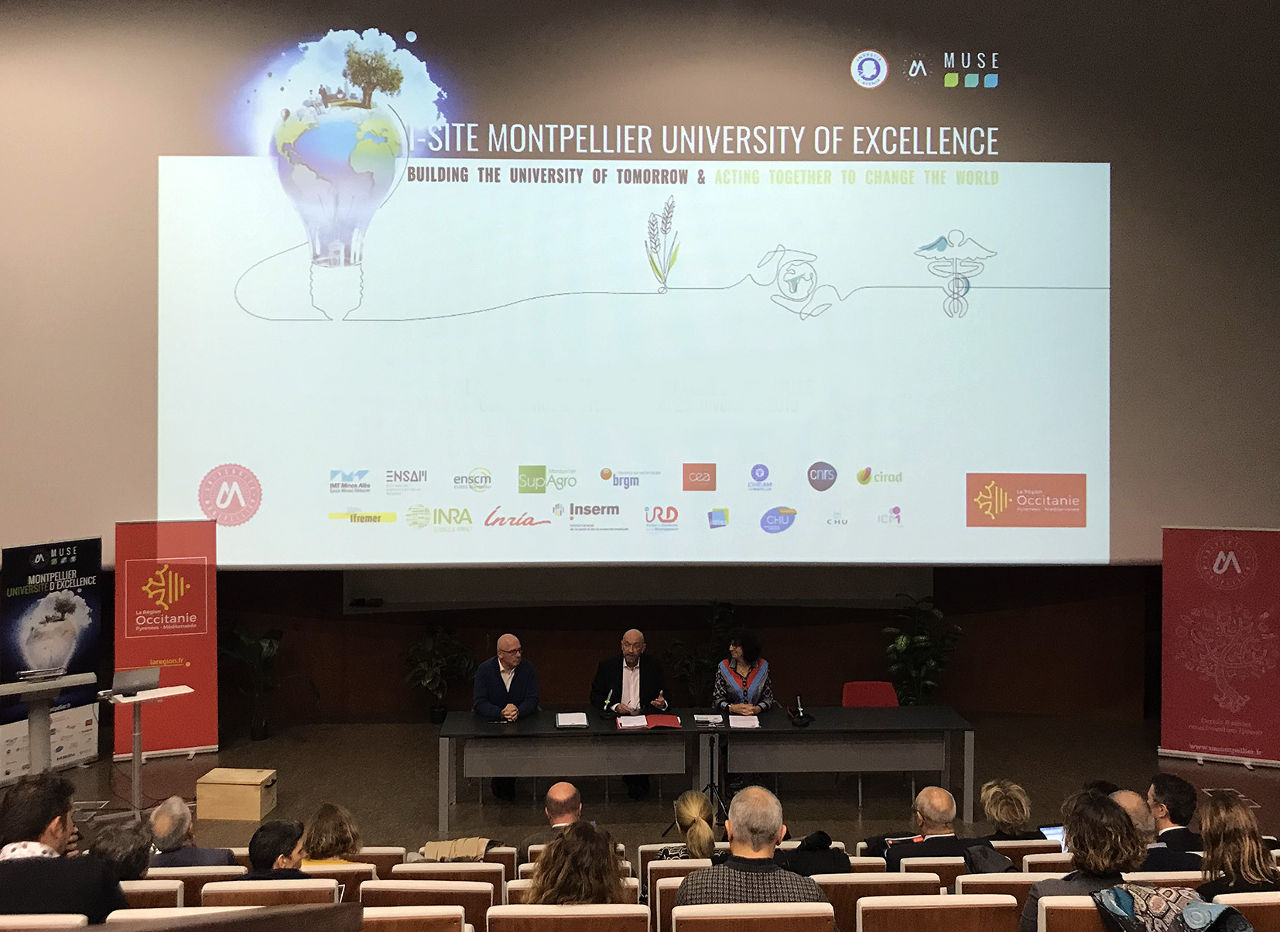 Gathered under the presidency of Jean-Marc Rapp to evaluate both Lyon’s and Montpellier’s projects, the international jury auditioned a delegation lead by UM President Philippe Augé and comprised of Antoine Petit, CEO of CNRS, Gilles Bloch, CEO of Inserm, Michel Eddi, CEO of Cirad and François Pierrot, executive Director of  I-SITE MUSE.

In 2017, the MUSE project received the “Initiative-Science Innovation Territory and Economy” (I-SITE*) certification and had two years to prove its worth. “At the end of a two-year probationary period, UM, with the research organizations, health facilities, Montpellier SupAgro and the Ecole de Chimie de Montpellier (ENSCM), succeeded in demonstrating their ability to trigger unprecedented dynamics at territorial scale and create a large internationally-oriented university” explains UM President Philippe Augé, who welcomes the international jury’s decision.

Maintaining the certification was indeed essential to establish the Université de Montpellier’s national and international recognition around a unique identity built on three key world challenges: food security, environmental protection, and human health. Especially since it is the sole university in the Occitanie region to have been awarded such a certification of excellence. “This achievement results from the collective intelligence that mobilized locally around the scientific community, and with the local authorities and companies” observes Philippe Augé.

With the University’s international exposure and attractiveness in mind, the consortium carried out collective efforts that promptly showed positive results and that were presented to the international jury. World leader in Ecology in the 2018 and 2019 Shanghai ranking by subject , jumping up from the top 400 to the top 200 universities in the Shanghai global ranking over two years, UM is also acknowledged as France’s most innovating university, according to the Reuters’s world ranking published last October. This significant climb in international rankings results from the adoption of a common signature charter for scientific publications by the consortium starting October 2017.  “Such improved international recognition, together with the IDEX-ISITE jury’s validation, greatly rewards the work collectively undertaken by all scientists, research-professors, engineers, administrative staff and students of the MUSE consortium” comments François Pierrot.

The jury was able to appreciate the major transformations  already achieved in each of academic life’s main domains. Yet, the consortium is invited to maintain the on-course track and to consolidate the site for deeper integration of higher education institutions and other partners in the life of the University. Consequenty, in the coming days, new calls-for-projects will be published and milestones will be set to implement the validated road map towards the construction of the target university before the end of 2021.

Final perennation of the I-SITE certification and of the related state endowment (550 million euros, providing 17 million-euro budget annually) will take place after a final assessment in 2021.

* The IDEX/ISITE program, created in 2010 within the framework of France’s Investment for the Future Program, seeks to promote a limited number of research universities in France on sites that benefit from exceptional and remarkable scientific potential, and that are capable of inducing synergy between universities, higher education institutions, research organizations, health facilities and companies.