In Africa, to better monitor variants, more sequencing is needed

In Africa, to better monitor variants, more sequencing is needed

The rapid spread of the Omicron variant, first identified in South Africa and Botswana, once again raises the issue of variant surveillance. 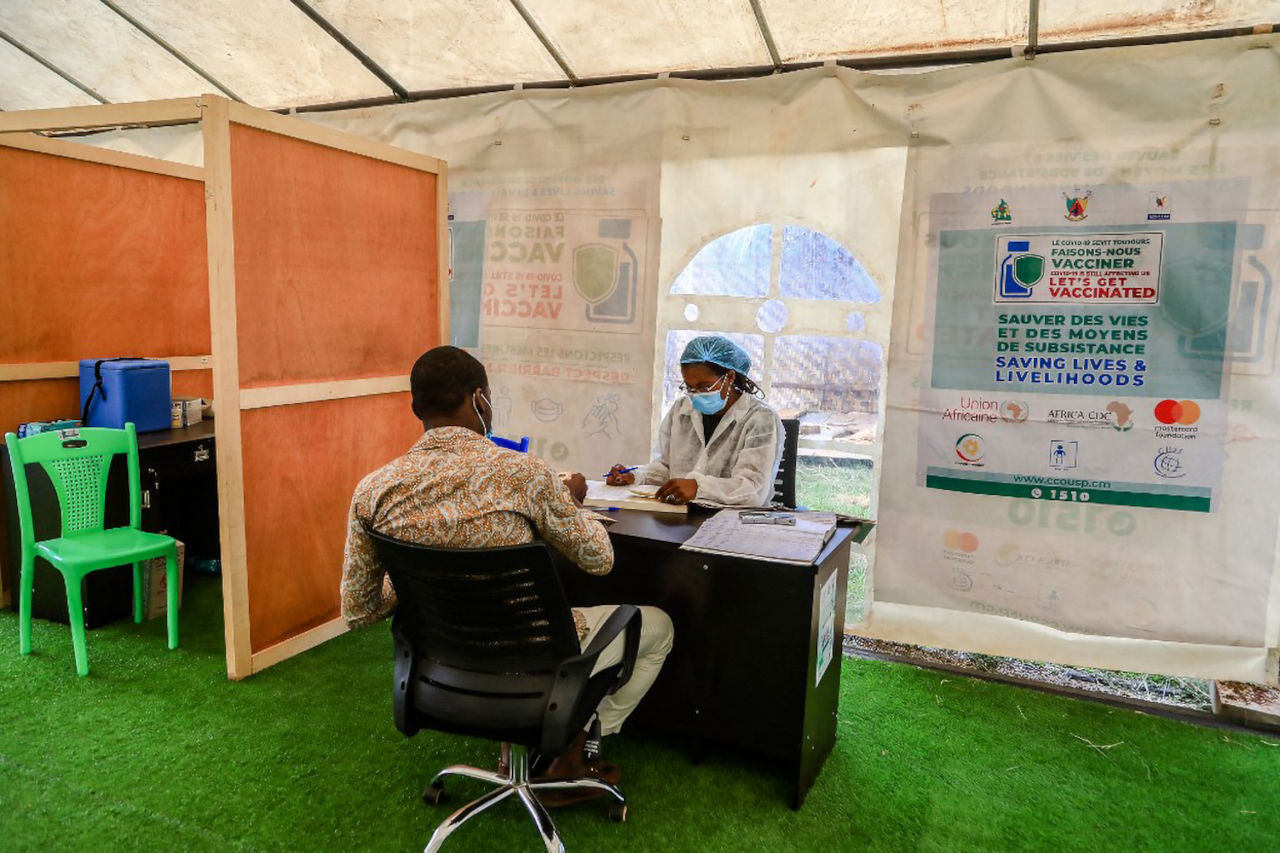 A man receives the Covid-19 vaccine in Yaoundé, Cameroon, on 29 November 2021. In this African country, as in others around the world, misconceptions and misinformation on social networks are holding back the vaccination campaign.

Alpha Keita, virologist at the IRD and deputy director of the Cerfig (Centre de recherche et formation en infectiologie de Guinée), Dramane Kania, virologist at the Muraz Centre of the National Institute of Public Health in Burkina Faso, and Richard Njouom, Head of the Virology Department at the Centre Pasteur du Cameroun in Yaoundé, give an update on the situation of the Covid-19 epidemic in Africa, and look back at the issues involved in sequencing.

The Conversation: What is the status of the epidemic in Africa? What do we know about the circulation of the virus today?

Dramane Kania: If we compare the situation on the African continent with that on other continents, the impact of the pandemic seems to be less important: the number of registered cases is lower, as is the number of deaths.

However, one should not jump to conclusions: these appearances are probably misleading, and in reality the circulation of the virus is certainly greater than these figures indicate. This discrepancy is due to issues specific to the African continent: in many countries, diagnostic capacity is limited and data is lacking, even though projects such as APHRO-COV and other initiatives have helped to strengthen diagnostic capacity in several countries. In addition, a large part of the population is not necessarily accustomed to referring to health facilities in case of health problems. For these reasons, the actual number of Covid-19 cases is most likely underestimated.

This hypothesis is corroborated by the fact that in countries with more resources and where diagnosis can therefore be made more routinely (such as in South Africa or the Maghreb countries), the number of reported cases is greater. In West Africa, on the other hand, the existence of an underestimation has been confirmed by seroprevalence studies, which detect the antibodies produced after infection with the virus. These studies have shown that in some places more than half of the population has been exposed to SARS-CoV-2 in the last few months.

Alpha Keita: As of 2 January in Africa, there were more than 9.5 million cases and nearly 230,000 deaths. This is less than on other continents, but we can see that there are great disparities from one country to another: most of the deaths recorded are in the countries with the most efficient health systems, which are able to collect data related to the epidemic correctly. This lends credence to the hypothesis of under-reporting of cases.

As part of the Ariacov project, which supported the African response to the coronavirus, we conducted a serological study in Guinea on samples taken from the population of the capital, Conakry. This work, which consisted of three surveys conducted a few months apart, revealed that by December 2020, 17% of the population of Conakry had been in contact with the virus. By the end of February - beginning of March, this figure had risen to over 30% of the population. By June-July, it had risen to almost 50%.

Richard Njouom: In Cameroon the situation of the Covid-19 epidemic is identical to that of other sub-Saharan African countries: the number of confirmed cases of SARS-CoV-2 infection is low, as is the number of deaths attributed to the virus, probably due to underestimation.

In order to better understand the impact of the Covid-19 pandemic and to follow the evolution of SARS-CoV-2 on the African continent, we launched a collaborative research programme called REPAIR in the spring of 2020, with all the African institutes that are members of the Pasteur Network. This work covers various fields: development and evaluation of the performance of diagnostic tests (at the Centre Pasteur in Cameroon, we have developed an easy-to-use colorimetric test, which is currently being evaluated in the field and in the other Pasteur Network institutes), studies on the molecular epidemiology of the virus, mathematical modelling of its spread, etc. Seroprevalence surveys of SARS-CoV-2 have also been carried out in several "sentinel" populations, such as health workers and blood donors.

TC: Can this circulation of SARS-CoV-2 encourage the emergence of variants?

DK: What the theory tells us is that the more a virus circulates, the greater the risk of variants emerging. Indeed, when a virus multiplies in an infected cell, it copies its genetic material countless times. In doing so, it can make mistakes, or mutations. Some of these mutations are deleterious, and the viruses carrying them die out; others are repaired; and still others persist.

The question is whether these changes in the genome (which is the 'blueprint' of the virus particles) will result in changes in the structure of the virus, and if so, what will be the consequences: will they change its transmissibility? Its virulence? Other characteristics?

To be able to detect this, a good monitoring or surveillance system is needed, based in particular on extensive sequencing capabilities. Unfortunately, most laboratories in Africa do not have the technical capacity to do this. In most cases, we cannot go beyond diagnostic tests, which only detect the presence of the virus or confirm its absence.

While it is sometimes possible to sequence the genome of viruses from samples that test positive, this can only be done on an ad hoc basis, and sometimes only 3 or 4 months after the samples are collected. The capacity to do real-time monitoring of variants is very insufficient; for this reason, our vision of the evolution of the epidemic and the number of variants actually circulating on the continent is certainly distorted.

Countries that are able to set up this type of surveillance detect more variants, which is probably one of the reasons why South Africa has identified at least two variants of concern in its territory since the beginning of the pandemic. This allowed the authorities to alert the international community early on. As proof of the importance of sequencing, at the Muraz centre in Bobo Dioulasso, a partner of theANRS | Emerging Infectious Diseases, we were able to detect two cases of infection by the Omicron variant in mid-December, which means that it is also circulating in Burkina Faso.

TC: In concrete terms, how is the monitoring of variants carried out?

AK: It is essentially based on the capacity of countries to sequence circulating viruses. At the moment, when you look at the contributions to the databases in which researchers deposit their sequences (such as the GISAID platform, for example), you can see that Africa participates very little. Guinea, for example, has deposited only 311 genomes on GISAID since 10 January 2020.

To improve the situation, the Afroscreen project was launched. Financed by the French Development Agency (AFD) and coordinated by the ANRS | Emerging Infectious Diseases, in collaboration with the Pasteur Institute and the IRD, it has enabled us, in Guinea, to carry out routine screening of samples over the last two months.

This approach consists of searching for mutation profiles in positive samples that correspond to the known variants listed by the World Health Organisation (WHO). This screening is carried out on samples from patients hospitalised in one of the three major health centres in the capital, from people who come for spontaneous testing, or from travellers. The results can be obtained within a few hours, which allows for real-time monitoring.

However effective the screening is, it has limitations, as it focuses on already known variants (variants of interest or variants of concern), whose mutations have already been identified. The mutation profiles of unclassified variants are all listed as 'wild', which does not provide additional information and does not allow for comprehensive monitoring of emerging variants.

Only whole genome sequencing can provide a detailed analysis of the mutations that may occur in new variants, and whether or not they are of concern, whether there is a concern that they make the virus more transmissible, or allow it to evade immunity - whether natural or conferred by vaccines, etc.

There is therefore a need to build capacity in as many countries as possible (e.g. to be able to compare data across countries), which is also the purpose of the Afroscreen Network.

RN: Sequencing is indeed essential to study the spread of SARS-CoV-2 in time and space and to track the emergence of dangerous variants. In Cameroon, we have been able to strengthen our capacities, both in terms of equipment and staff training. We were thus able to set up genomic surveillance in January 2021, which resulted in the sequencing of 116 complete genomes. The results confirmed the circulation of the Alpha, Beta, Delta and Gamma variants in the country. We hope that the Afroscreen Network will be able to expand this effort tenfold.

Another benefit of being part of a network of this size, which includes 13 African countries, is the sharing of knowledge and data. By publishing the results in the open GISAID database, it will be possible to monitor and better understand the circulation in the region.

TC: What is the status of vaccination on the continent?

DK: Many countries initially encountered difficulties in obtaining the vaccine. Various initiatives have been taken to overcome this problem. Beyond this question of accessibility, which is certainly essential, there is a second problem: that of public support, which generally lacks scientific information to answer their questions. Fake news, on the other hand, is abundantly relayed on social networks, and fuels people's mistrust of vaccination. At present, it seems that only citizens who are obliged to travel are willing to be vaccinated... Reversing this trend is another challenge.

RN : In Cameroon the vaccination situation is very backward: only 1.1% of the target population has a complete vaccination schedule. People are distrustful of the vaccines available in the country. One of the challenges is therefore to convince people of the merits of vaccines. The delay in vaccination in Africa makes it all the more important to strengthen the monitoring of variants through sequencing. If we can determine which variants are circulating in which territories, it would be easier for the health authorities to decide to set up targeted vaccination campaigns, which would be more effective in containing the epidemic.