Philippe Augé, re-elected President of the University of Montpellier

Philippe Augé, re-elected President of the University of Montpellier 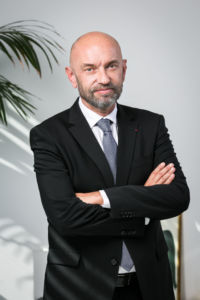 The only candidate for the presidency, Philippe Augé received 31 votes out of the 36 members of the Board of Directors. Last November, the lists supporting him obtained 11 of the 14 seats in the teacher-researchers, teachers and researchers colleges.

At the same meeting, Bruno Fabre, Professor of Management Sciences, was re-elected Vice-Chairman of the Board of Directors (31 votes out of 36), a position he held during the two previous terms of office since the merger in 2015. The other vice-presidents will be elected, on the proposal of the President, during the first half of January 2022.

About the University of Montpellier

With its 16 faculties, schools and institutes, and 72 research structures, the University of Montpellier brings together a vast community of knowledge: science, technology, physical activities and sports, medicine, pharmacy, law, political science, economics and management. With more than 50,000 students and 4,800 staff, the University of Montpellier is now one of the largest universities in France.

The UM is internationally recognised for the excellence of its training, research and innovation capacity in a wide range of scientific fields linked to the major challenges facing society, foremost among which are food safety, environmental protection and human health.... It occupies a leading position in international rankings, being on the world podium in ecology in the Shanghai thematic ranking, in the top 200 of the general Shanghai ranking and as theleading French university among the most innovative universities in the Reuters ranking.

As a responsible university, the UM is particularly committed to gender equality and the fight against all forms of discrimination, environmental issues, scientific integrity and science-society relations.

More about the Presidency of the University of Montpellier.