UM and ENSCM together for a common strategy and ambitions

UM and ENSCM together for a common strategy and ambitions

The change in status of the University of Montpellier, which has become an experimental public institution, has made it possible to integrate the Ecole nationale supérieure de chimie de Montpellier (ENSCM) as a component institution of the University. The first major step was the signing of a multi-year contract of objectives and commitments. 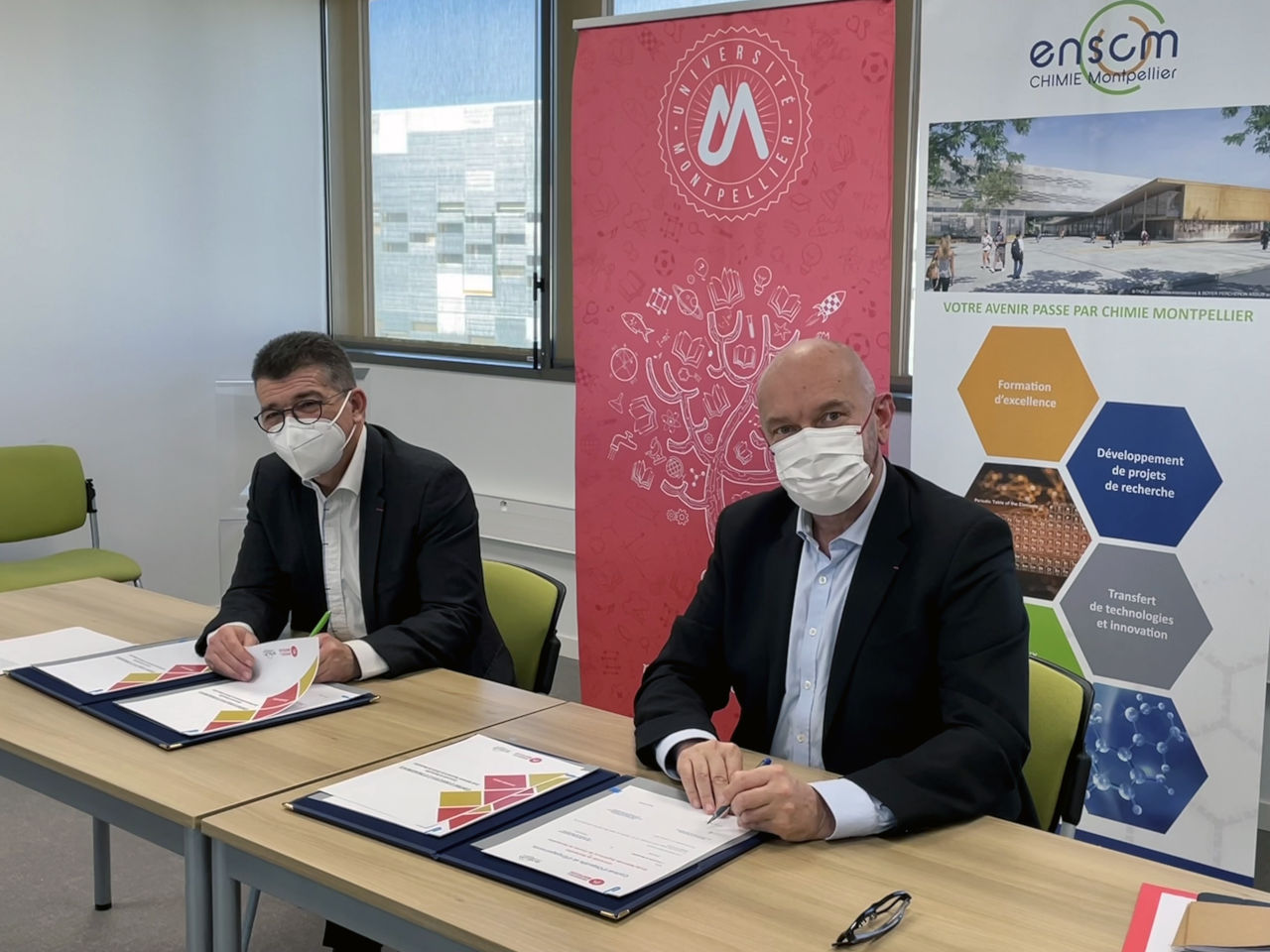 The day after its approval by the University of Montpellier's Board of Directors, Philippe Augé, President of the UM, and Pascal Dumy, Director of the ENSCM, signed their first multi-annual contract of objectives and commitments, which formalises the mutual objectives of convergence and mutualisation for the benefit of the deployment of the University of Montpellier's ambitious strategy.

" The stakes, behind what might appear to some as an institutional mechanism, are high and are not limited to a commitment made within the framework of our I-Site MUSE," says Philippe Augé, President of the University of Montpellier.

The institutional mechanism in question is none other than the integration of the ENSCM, which is now registered in the statutes as an establishment-component of the UM. It therefore has a special status, since it retains its legal personality, its deliberative bodies and its means of action (personnel, budgets, etc.). One of the strong commitments is characterised, for example, by the co-signature of diplomas.

This integration, which testifies to the mutual and lasting trust established over the last few years between the school and the University, offers new opportunities for training, research, staff and students, while contributing to the UM's development and influence strategy. "It is a question of placing the UM and the ENSCM in a shared strategy, at the level of the site, and behind a common banner, in order to obtain the means to support our ambitions: to make the UM one of the best national universities, to strengthen its attractiveness and its reputation in international rankings," adds the President.

The multi-annual contract of objectives and commitments between the University and its component institution, provided for in the statutes of the EPE, is part of a shared ambition to respond to a double challenge: territorial anchoring and excellence. These two criteria are required for international visibility, but they also ensure that the chemistry sector has a prominent place under the 'University of Montpellier' brand in the fields of training, research and innovation, as Pascal Dumy, Director of the ENSCM, points out:

" This contract is the score to set our duties and rights to music, and to enable the conductor to carry out the shared strategy in order to achieve the common objectives and ambitions .

This contract is structured around three main areas: "research and development"; "training, student life and social responsibility"; "institutional life and administrative modernisation". Its strategic objectives are to increase the scientific potential of the two partners, to promote the common brand "University of Montpellier" internationally and to favour a better national and international visibility in the field of chemistry and its interfaces. In terms of training, this contract proposes an attractive, coherent and enriched offer, including at the interfaces with other disciplines. It also contributes to the development and promotion of engineering training at the University of Montpellier. Finally, it promotes social responsibility for all users and staff.