This week Thomas Kroj, a biologist at PHIMdetails his study on the stimulation of natural immunity in plants published in Nature Communications. In the second part of the program, Julien Fullenwarth from theICGM explains X-ray fluorescence spectroscopy.

Herbicides, insecticides, fungicides, or in their softer version "phytosanitary products". It was in the 1930s that synthetic pesticides made their entry into the world agricultural scene. The rest of the story is well known: their use became widespread as the population grew and agriculture intensified. Critics will also soon intensify and scientific studies will not cease to demonstrate the dangers of pesticides for human health and biodiversity.

However, fighting against the use of pesticides is not that simple. The population continues to grow and with it our food needs. And if the organic food is progressing in our plates, it is still far from seducing the professionals of the food-processing world.

So how can we protect crops from disease while ensuring good agricultural production? This is what is at stake in the necessary agricultural transition that our societies must carry out in order to face the food challenges of tomorrow.

Faced with this challenge, science obviously has a role to play, as shown by this study carried out by a team from Montpellier bringing together researchers from INRAE, CNRS and Inserm. They were interested in rice and found that this plant was capable of deceiving pathogens and stimulating its immune response by using a decoy. All that remained was to use this method to boost the plant genome and observe promising results published last March in the prestigious journal Nature Communications.

Thomas Kroj is our guest. He is a biologist at PHIM for Plant Health Institute Montpellier.

In the second part of the program we take you to the Charles Gerhardt Institute in Montpellier. If, like me, X-rays and gamma rays inevitably evoke the universe of a marvel then our superhero of the day is Julien Fullenwarth. He is an engineer and in his everyday life he analyzes materials using X-ray fluorescence spectroscopy on the X-ray and Gamma-ray Network platform.

At LUM LA SCIENCE you have the program, let's go!

Find the program "A LUM LA SCIENCE" on Divergence FM 93.9 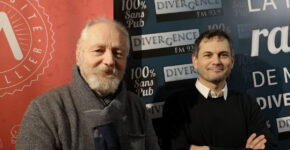 A LUM LA SCIENCE [S02-ep13] : From the resilience of teeth to the Hummingbird

This week in A l'UM la science Alban Desoutter and Frédéric Cuisinier from LBN talk about...

"The microbiota-gut-brain axis and its role in psychiatric disorders"

It is recognized that microbes residing in the gastrointestinal tract...