Since the start of the Covid-19 pandemic, there have been strong opinions about the evolution of the virulence of SARS-CoV-2. For many, it is bound to diminish, since viruses, bacteria and other parasites have always lost their virulence by adapting to their hosts. 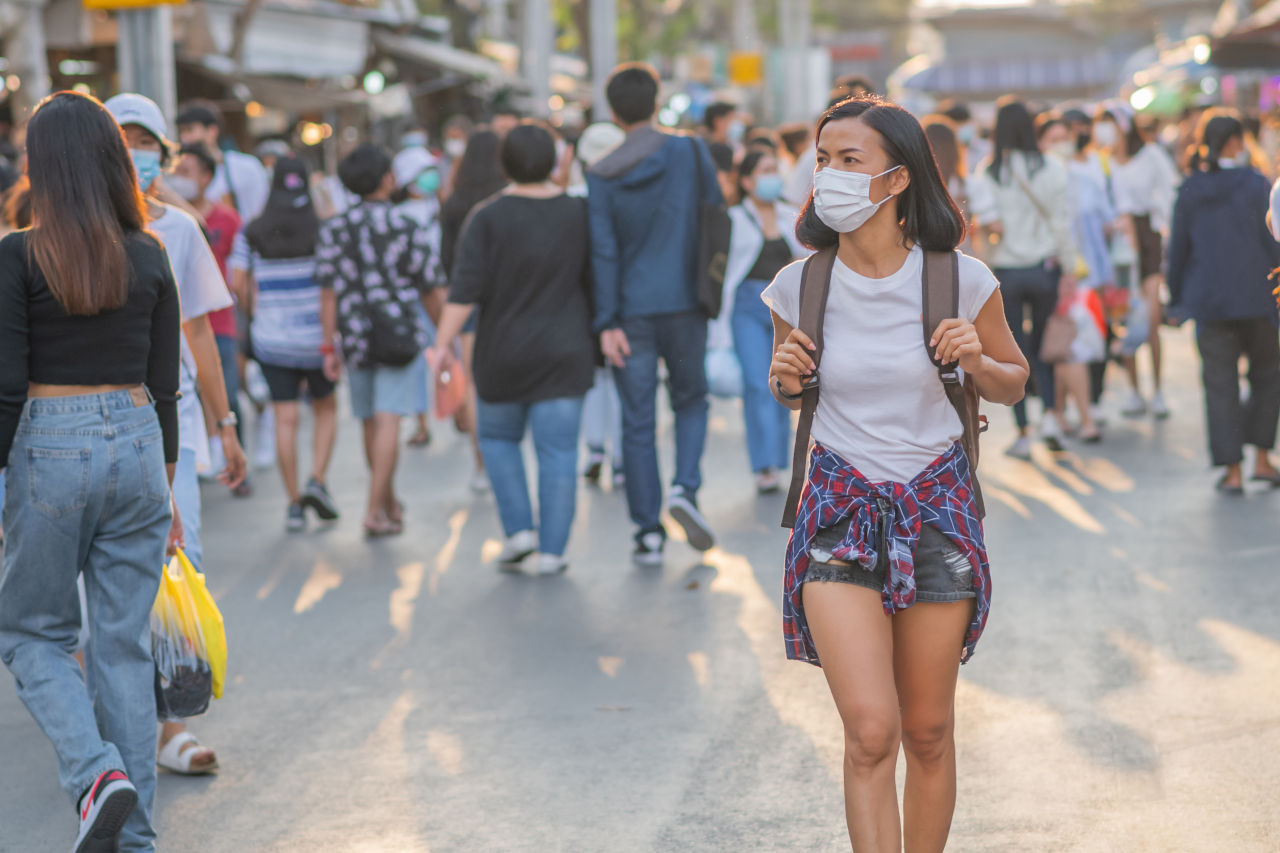 Unfortunately, this "intuition" does not stand up to analysis, because it requires us to see the human immunodeficiency virus (HIV), the tuberculosis bacillus, the malaria haematozoa or the flu as exceptions. In fact, no matter how hard we look, it is difficult to find 'parasites' (to use an evolutionary biology term) that conform to this axiom, which was dubbed the ' law of decreasing virulence ' at the beginning of the 20th century.

Why then does this view persist? What do recent findings in evolutionary biology tell us about virulence? And what can we expect in the case of SARS-CoV-2?

Do not confuse lethality with virulence

The logic behind the theory of systematic evolution of parasites towards a state devoid of virulence(avirulent) is childishly simple: for the parasite to kill its host is to kill the goose that lays the golden eggs. In other words, strains (or 'variants' to use a more fashionable term) that kill their host quickly should be less successful than others, and therefore disappear.

One explanation for why this century-old theory is still so prevalent is the confusion between the notions of lethality and virulence.
Lethality is the proportion of infected individuals who die as a result of infection with a given parasite, in a given place, at a given time. Many elements contribute to reducing the apparent lethality: treatments, vaccination, quality of clinical management, etc. Virulence, on the other hand, corresponds to the propensity of the parasite to harm its host. It is quantified in the absence of specific care.

In other words, the same viral variant will have a different lethality from one country to another depending, for example, on the quality of the hospital system. On the other hand, its virulence will be unchanged.

In the case of SARS-CoV-2, there has been a decline in case fatality since the beginning of the epidemic in many countries, largely due to vaccination. In contrast, virulence has increased. Infections with the Alpha variant are causing more deaths than those involving the ancestral lineages that were circulating in early 2020. As for the Delta variant, the first results seem to indicate that it is more virulent than the Alpha variant, as it would lead to more hospitalizations in unvaccinated people. Preliminary results point in the same direction for the Beta variant.

Admittedly, this is counter-intuitive. But it also illustrates that evolutionary biology is a discipline in its own right, and that it is risky to proclaim oneself an expert in it. Many people consider it to be more of a 'hobby', to be practised after having acquired sufficient experience in more proximate subjects, such as the mechanisms of development or the physiology of organisms. This is probably another reason for the persistence of preconceived notions about the evolution of virulence.

Does evolutionary biology really have more to offer than the insights of 'old sages'? Obviously, this field of research suffers from the fact that an epidemic cannot be replicated identically. However, the analysis of epidemics prior to the one we are currently experiencing (notably HIV) and so-called "experimental" evolutionary studies conducted on other parasites are rich in information.

To begin with, a distinction must be made between two categories of damage inflicted by a parasite on its host, depending on whether or not it influences the spread of the parasite: non-adaptive virulence and adaptive virulence.

Non-adaptive virulence does not benefit either party. In the case of SARS-CoV-2, this can be classified as particularly severe manifestations of infection, such as cytokine storms. The second category of virulence is termed 'adaptive', as it is associated with improved spread of the parasite, either directly or indirectly.

In the case of HIV, for example, it has been shown that the more virulent variants - those that produce the most virus particles by exploiting their host cells more efficiently or evading the immune response better - are also more contagious, as the likelihood of transmission is related to the amount of virus in the blood.

Distinguishing between non-adaptive and adaptive components of virulence allows for better reasoning about the evolution of this trait. Non-adaptive virulence is generally expected to decrease, since it is only associated with costs. However, it is not that simple, as the life cycle of the parasite must be taken into account.

In the case of SARS-CoV-2, severe symptoms usually appear after 2 weeks of infection, yet over 95% of transmissions occur before day 11. In other words, from the point of view of this coronavirus, late pathological (especially inflammatory) manifestations of virulence do not constitute a loss of transmission opportunities. Therefore, it is unfortunately unlikely that natural selection will favour variants that cause such immunopathological manifestations less frequently.

For the adaptive component of virulence, the predictions are even less straightforward. Everything depends on the relationship between the costs (virulence) and the benefits for the propagation of the virus (transmission rate, duration of infection). Again, in the case of HIV, it has been shown thatan intermediate level of virulence maximises the selective value of the virus, i.e. the number of infections generated by a person carrying the virus.

One element that might lead us to believe that there is such a correlation between virulence and transmission in the case of SARS-CoV-2 is that the more transmissible variants are also more virulent.

For example, our team showed that in France the Alpha variant had a clear transmission advantage over the ancestral lineages. Our British colleagues concluded that its virulence had increased by 50%. Similarly, in June 2021 we showed that the Delta variant was more contagious than the Alpha variant. According to this logic, a more transmissible variant could therefore be even more virulent.

What can we expect?

The fact that more contagious variants are more virulent suggests that the adaptive component of virulence is not zero.

The difficulty in anticipating viral evolution is that we need to know how well the virus, and thus the Delta variant, is now adapted to us. Does this coronavirus still have room to exploit its human host more effectively (i.e. for this level of infectiousness, could it be less virulent)? Or, on the contrary, would any decrease in virulence also translate into a decrease in contagiousness?

In the first case, while the virus has some room for manoeuvre to better adapt to its host, it is almost impossible to anticipate the next stage of its evolution. Mutagenesis experiments could nevertheless help to identify the most stable viral forms. It should be noted that these mutant generations in the laboratory are carried out in a secure manner (for example, only a given viral protein is worked on).

Such work, known as 'deep mutation screening', has been carried out on a part of the gene used to make the virus' S protein (the one containing information about the part of the protein called the receptor binding domain, RBD), which serves as the 'key' to its entry into our cells. The work consists of generating all possible mutations in the RBD and then studying their effect on the production of the resulting S proteins, and their ability to bind to the ACE2 receptor on the cell surface (the receptor that serves as an entry point for the virus). This work identified sites of particular risk in terms of variant evolution.

In the second case, one might expect virulence to stabilise around a value that maximises the number of secondary infections, thus optimising transmission rate and virulence. Predicting this would require knowing exactly the constraints between these two features of the infection. But here again, this is not the end of the story.

The effects of immunisation

Population immunisation (natural or through vaccination) disrupts the adaptive landscape of viruses: the most adapted variant in an unprotected population may find itself in the minority in an immunised population. Brazil experienced this tragically,having built up herd immunity at the cost of a major health disaster, but still fell victim to a second wave of the Gamma variant - which is thought to have invaded the country rapidly because it was partly able to escape the immunity conferred by the ancestral strains.

In the short term, vaccination is essential: like natural immunity, it reduces the lethality of the infection, accelerating the transition to a dynamic similar to that of seasonal respiratory viruses. Indeed, a year ago, no one would have dared to hope for such a high vaccine efficacy against the occurrence of severe forms (even for the Delta variant, it is estimated that this protection is of the order of 85%). This effectiveness highlights the inequalities in vaccination: for those who will not have the chance to have access to the vaccine, the lethality of infections is already higher than in 2020 and could increase further with the evolution of future variants.

Beyond the sense of urgency resulting from the health situation, it is important to consider the pandemic in the medium and long term. Predictions are very difficult to make, because the relationship between the virus and our immune system is co-evolutionary: viruses mutate and our immune responses change. In order to try to anticipate the future, we need to take into account the effectiveness and duration of natural and vaccine immunity, which reduces the speed of evolution of viral populations: fewer infections means fewer mutations...

The study of these dynamic relationships and their implications is the subject of evolutionary biology. Unfortunately, in addition to the chronic lack of funding for scientific research in France, this discipline suffers from a lack of recognition and the available knowledge is too rarely put to use. One example among many: despite the effort made to include various facets of SARS-CoV-2 research in the scientific council, it does not include any⋅e evolutionary biologist.

To leave the anticipation of evolutionary trends in pathogens to the intuitions of a "conventional wisdom", unaware of the latest discoveries and tools of evolutionary biology, is to proceed with one's eyes closed. In infectious diseases, this can have particularly serious consequences given the speed with which microbes evolve and spread. In public health, there is an urgent need to reconcile Louis Pasteur and Charles Darwin.