A dam against the Mediterranean

A dam against the Mediterranean

It is a tangible reality: the beaches are disappearing before our eyes. What is causing this galloping erosion and what are the consequences? A team of specialists is examining the coastlines of the southern Mediterranean to better understand and anticipate the phenomenon. Gil Mahé, hydroclimatologist, explains. 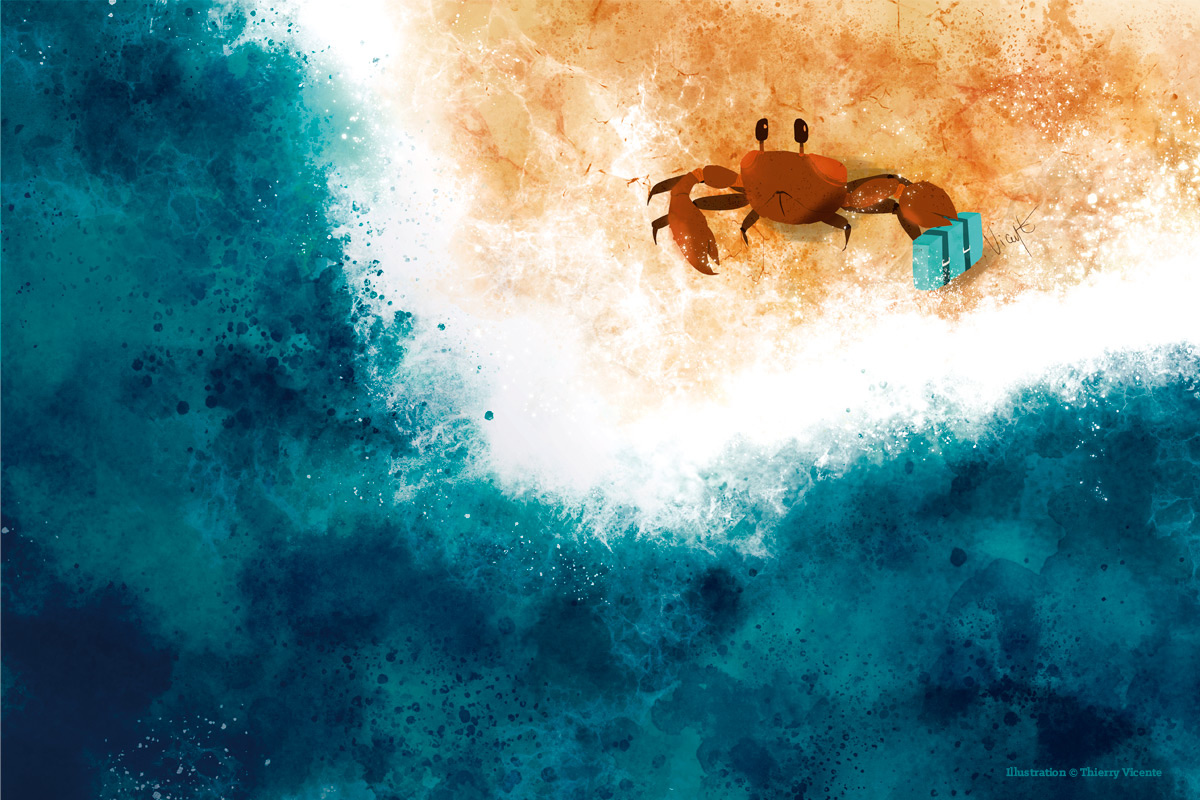 Did that buoy off the coast seem less far away last year? And that beach where you have your habits, did it seem to have more rows of parasols the previous summer? It's not an illusion: the beaches are disappearing, visibly in places. " Unless you live by the sea, you don't realise how quickly this phenomenon is taking place," stresses Gil Mahé, hydroclimatologist at the Montpellier Hydrosciences Laboratory*.

Although this erosion affects almost all the coastlines of the Mediterranean Sea, it is particularly marked on the 4600 kilometres of arid coastline stretching from the Bay of Tunis to the Nile Delta, as shown by the satellite images studied by the scientists. " In the Bay of Tunis, the retreat of the coastline is more than 20 metres per year," explains Gil Mahé. To highlight the accelerated erosion of the sandy coasts of North Africa, he joined forces with a team of international researchers from theNational Institute of Marine Sciences and Technologies in Carthage, Tunisia, and theUniversity of Southern California in the United States. Their study shows that 70% of the sandy and deltaic coasts are already threatened, compared with 47% for the entire southern Mediterranean coastline. Specialists are seeking to better assess the impact of this phenomenon, but also to better understand its causes.

From the dam to the beach

Indeed, although the sea is rising, it is not the only one responsible for the disappearance of beaches. " The phenomenon also originates inland," explains this specialist in the hydrology of Africa's major rivers. And it is indeed to the rivers that we must turn to find an explanation. And especially to those structures that have been lining the rivers for decades: the hydraulic dams. The link between dams and beaches? It is obvious. " The rivers carry sand and sediment drained from the interior of the continent that constantly replenish the beaches naturally eroded by marine currents, which is the normal geomorphological functioning of the coasts," explains Gil Mahé.

A balance that is literally hampered by the construction of dams. While these concrete giants can let water flow through if necessary, they block the passage of sand and deprive the coastline of it.
"The finest particles, such as suspended alluvium, can pass through the dam, but the heavier sand sediments very quickly and remains blocked at the bottom, sometimes ending up by completely silting up the dam," explains the hydroclimatologist. As a result, the beaches, which are more heavily recharged with sand, are in danger.

This phenomenon is all the more worrying as dams have sprung up throughout the Maghreb in the space of a few decades, in line with the increase in population and its growing need for water. " And this is not going to get any easier in a context of water scarcity aggravated by climate change, predicts Gil Mahé. With these dams we are solving one problem, but creating another. We are even creating several if we are to believe the researchers who have studied the consequences of beach erosion. The disappearance of the rows of parasols is only the tip of the iceberg, and if the lack of space to spread out one's towel does indeed affect the entire tourism sector, beach erosion represents a real socio-economic bomb. "With the retreat of the coastline, the ocean is getting closer to the water table, the salt water is said to penetrate further into the interior of the coast. As a result, land that was previously arable is no longer arable, which is a major blow to agriculture. "And what about all the infrastructure built along the coast? Ports? Nuclear power plants? The problem of the coastline concerns millions of people," insists Gil Mahé.

Any solutions? Local, temporary. For example, we can rethink the construction of dams so that they allow sand to pass through, which would help slow down coastal erosion. " It is possible, but these are only short-term mitigation solutions, about twenty years at most. For Gil Mahé, we must above all be aware of the inevitability of this phenomenon. "We don't realise the extent of the problem and its exponential aspect. In reality, it's already too late, we can no longer prevent the sea from rising, even if we don't know exactly by how much, and what we need to do now is to determine how to adapt in the first instance, and where the risks of submersion are too high, to think about organising a retreat! This is a colossal task when we know that in countries with a coastline, proportionally more people live in coastal areas. Millions of people to be displaced, climate refugees of the near future. "What should be done with the people and property concerned? Everything must be done in a spirit of solidarity, we cannot let the people who live by the sea lose everything they have. In order to "leave the coasts properly", the specialist calls for credit to be given to climate projections and for anticipation by starting this process now. "Some elected politicians are fully aware of this and are already involved in this process, what is needed now is a strong commitment".