She has revolutionised chemistry by making it more environmentally friendly. Claude Grison has just been awarded the European Inventor 2022 prize in the "Research" category by the European Patent Office . A look back at the career of the director of the ChimEco laboratory, for whom dialogue and transdisciplinarity are the keys to innovation. 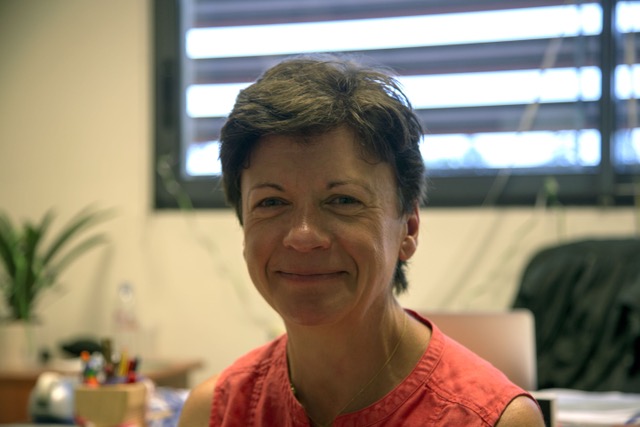 Not really an ecologist, and not only a chemist, she defines herself as "a person who is not a chemist. ecochemist ". " Chemistry and ecology are two fields that are not radically different but complementary. I am in contact with these two environments, which has enabled me to break down the boundaries between these disciplines to bring out new ideas "explains Claude Grison.

For the woman who is now director of the Bio-inspired Chemistry and Ecological Innovations laboratory, interdisciplinarity is a necessity, ' our views and knowledge are complementary '. It was in 2007 that Claude Grison first became interested in ecology, thanks to the requests of four preparatory students at the Lycée Joffre: " They asked me for help with a project on depollution by plants, and that's when I realised that some plants survived in a hostile environment, in soils that were toxic for all other forms of life. Thanks to the teaching profession, I changed my research activities!

Intrigued and stimulated by this subject, which was not in her field, Claude Grison immediately wanted to know more about these "plant follies". So in 2008, the researcher joined the Centre for Functional and Evolutionary Ecology, "I was the first chemist at the CEFE," recalls Claude Grison. Knowledge of ecology gives us new ideas in chemistry to create something new.

It was in this laboratory that she began working on plants that hyperaccumulate metallic elements. What makes them special? They extract the polluting metals contained in the soil through their roots and accumulate them in their leaves. " For the ecologist, the question is:' Why are the plants there? " . For the chemist it is: " How do they live there? " . These two questions are complementary.

For the ecochemist, a third question then arises: can it be used for anything? " You also have to ask yourself what this work can bring to society, and what meaning you want to give to your research. And Claude Grison has found meaning. Firstly, because his work effectively cleans up the soil and restores an ecosystem that has sometimes been severely damaged.

But this is just the tip of the iceberg . I learned at that time that resources of certain metallic elements were threatened and that soon there would be no more zinc, for example, even though it is an essential catalyst for many chemical reactions. This famous zinc that plants extract from the soil and which is found in their leaves... ". What if these plants were the natural reservoir of zinc, the catalyst of tomorrow? And even the ecocatalyst of tomorrow, a new concept was born. " And even a new chemistry, which does not require any reagents or toxic and polluting solvents, a true ecological chemistry.

Very quickly, the results of her work began to flourish, and in 2009ADEME spotted the researcher. " They wanted to offer me the Pollutec-Ademe Prize for Innovative Techniques for the Environment, but in order to do so, we first had to protect our work and we had not filed a patent. In one week, a record time, it was done. " This first patent, followed by 35 others, marked a turning point in our research. And this Ademe prize has had a catalytic effect on Claude Grison's work, which is developing the use of his hyperaccumulator plants not only in mainland France but also in New Caledonia, where the soil is highly concentrated in nickel.

It is there, in the field, faced with industrial effluents that contaminate rivers and end up in the lagoon, that the researcher realises the importance of water pollution. What if these plant follies could also be used to clean up the water?

A question taken to heart in the Bio-inspired Chemistry and Ecological Innovations laboratory founded in 2014. " Chemistry had become so important that we could no longer stay at CEFE, so ChimEco was born ". As early as 2016, the researchers began to treat aquatic systems with plants. " They have molecular antennae on the surface of their roots that capture metallic elements. Claude Grison's team has identified 40 species of plants with these special properties, which use whole, living plants to capture metals in water.

The experiment took on another dimension when Claude Grison and his team found a dead plant in their pollution control system. " When it was dead, it still had the same capacity to clean up pollution. The process then evolved: " Now we grind up roots to make plant filters that clean up the water. And not just any roots... The chemist-ecologists use invasive species, real ecological disasters in wetlands. " The chemist-ecologists use invasive species, which are veritable ecological disasters in wetlands.

This is a revolutionary process with circular economy overtones, since the substances extracted from water by plants are then used to produce catalysts of plant origin that enable the production of various molecules needed by sectors such as the pharmaceutical industry, for example. It was to add value to these products that the start-up BioInspir, which now employs 10 people, was created in 2020. The company, which was born out of a desire to create a different kind of chemistry, is the only one in the world to master this technology, which uses no chemical inputs, solvents or synthetic reagents.

A new chemistry, with no environmental footprint, has earned Claude Grison the European Inventor 2022 award in the 'Research' category from the European Patent Office.